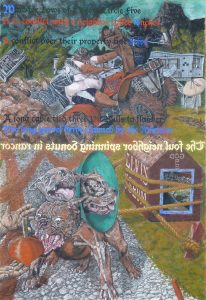 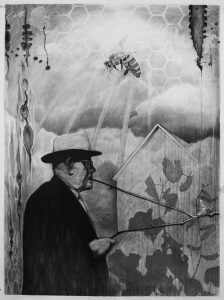 The UT Downtown Gallery is pleased to announce a two-person exhibition for the month of January. Meandering Mythologies will show the work of Timothy Massey and Gary Monroe.

Gary Monroe is an artist from Knoxville, Tennessee that has exhibited nationally since the 1980s. He draws from the cultural idiosyncrasies of his native state to create narrative works. The subject matter ranges from Appalachian religious serpent handlers to the iconic Elvis Presley. Dante Alighieri’s Divina Commedia inspires Monroe’s most recent work, Comedy County Cocke. Whereas Dante is guided through the underworld by the poet Virgil, Monroe’s eccentric characters travel through an East Tennessee region known both for vice (moon-shining, cock fighting) and ecstatic religious practices.

Timothy Massey is an Associate Professor of Art and Gallery Director at the College at Brockport, State University of New York. He received his BFA at the University of Tennessee, Knoxville in Printmaking and Drawing, and his MFA in Printmaking at The Ohio State University in Columbus. He is interested in imagery that evokes methodical observation motivated by curiosity and recollection, and fostered by a rich southern tradition of written and oral histories. As a native Southerner, he has a first-hand understanding and rich background in such belief systems, ranging from superstitions regarding weather, planting seasons, suspicious tall tales of derring-do, premonitions and symbols of good or ill fate, to curious religious convictions and rituals.