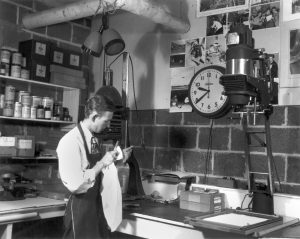 In 1942, the Army Corps of Engineers relocated James Edward Westcott to Oak Ridge, Tennessee, and assigned him the task of official photographer for the Manhattan Project – a massive wartime effort to produce the first atomic bomb. As secrecy of the project was paramount, the “atomic” city was fenced, and communication with the outside world was limited. What is more, no cameras were allowed inside its boundaries.

Thus, Westcott became not only the official photographer for the Manhattan Project, but he also became the sole photographer of the social and recreational events of Oak Ridge. It is only through Westcott’s photographs that the visual history of Oak Ridge can be appreciated.

July First Friday will be Friday, July 1, from 5-9pm at the UT Downtown Gallery. This Event is free and open to the public.